How to connect the output of one stage of an analog circuit to the input of the next without losing too much of your signal. 6 min read

In the previous section, Maximum Power Transfer and Impedance Matching, we covered the consequences of transferring electrical power between one stage and another. But in many or even most cases, we’re more interested in transferring a signal between stages, not just raw power.

Signals are time-varying voltages or currrents. They often carry information that we’re interested in moving through our system.

If we follow the suggestions below, we can design and analyze the two stages independently. This happens because we can use Algebraic Approximations to show that one stage does not “load” (in this context, “load” means “burden”) another, allowing us to divide-and-conquer: a powerful engineering strategy for both design and analysis!

Signals are most often carried as voltages. That’s because we live in a world of finite resistances, and we’d like to keep power consumption low, and Ohm’s Law suggests we keep currents low to minimize resistive P=I2R losses.

If we are trying to convey a signal from one stage to the next, then we can create a Thevenin equivalent circuit looking into the previous stage’s output, and another one looking into the next stage’s input. We then connect these two together. The previous stage’s output is our source and the next stage’s input is our load. We want to maximize the voltage transfer ratio VoutVin to deliver as much signal as possible from source to load: 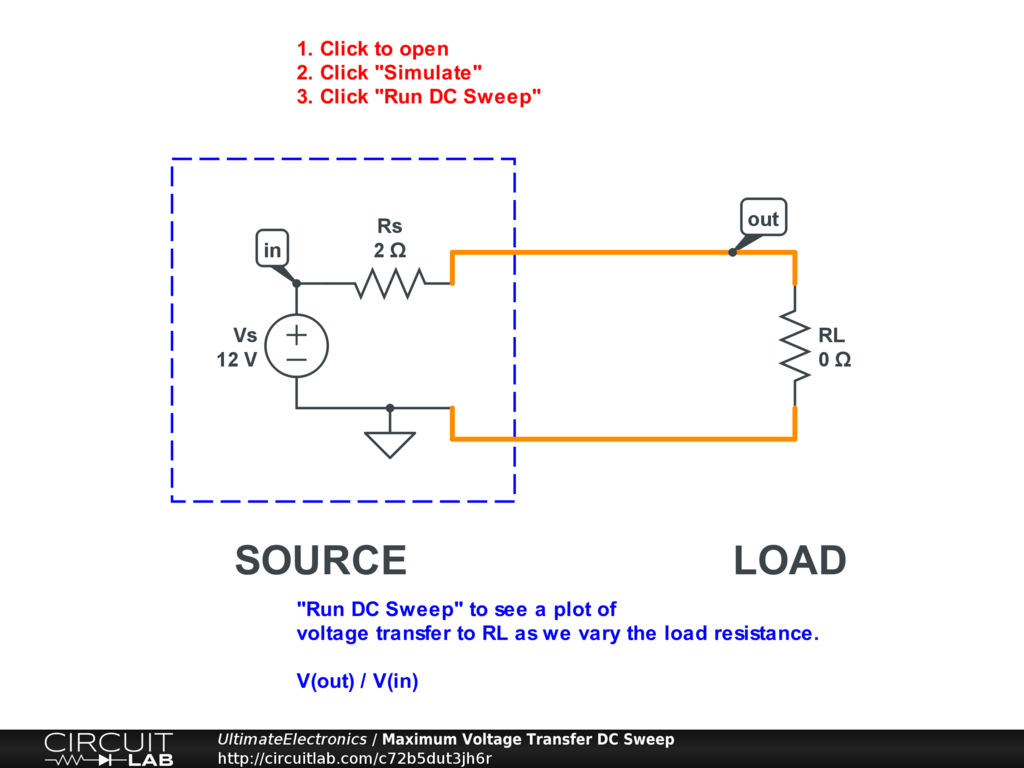 Exercise Click the circuit, click “Simulate,” and “Run DC Sweep” to see how the voltage delivered to the load varies as we adjust the load resistance. If you run the simulation, you’ll see clearly that the maximum voltage transfer occurs when RL≫RS .

This is a resistive voltage divider between the source resistance and the load resistance. The fraction of voltage received by the next stage is equal to:

which can be approximated by 1 if RL≫RS . If we maintain a RL-to-RS ratio of at least 100-to-1, we will maintain 99%+ voltage signal transfer.

If the source and load impedances are equal RS=RL , we’ll lose half of the voltage signal just in connecting the two stages! Probably not what the designers intended.

Sometimes, though less commonly, signals are carried as currents. (One reason to do so is that even though it costs more in power consumption, transmitting a signal as a current can be more robust to some types of noise and interference.)

In this case, our signal source (the previous stage’s output) can be modeled as a Norton equivalent circuit, like a non-ideal current source. (An ideal current source would have RS→∞ .) We can maximize the current transfer ratio from source to load: 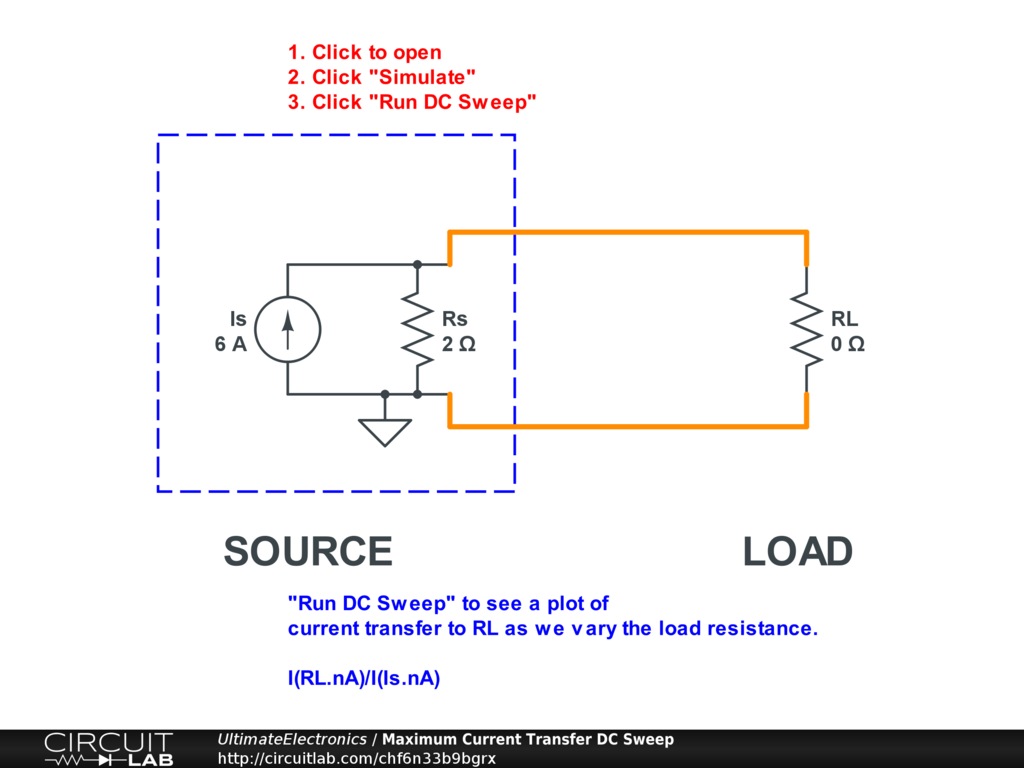 Exercise Click the circuit, click “Simulate,” and “Run DC Sweep” to see how the voltage delivered to the load varies as we adjust the load resistance. If you run the simulation, you’ll see clearly that the maximum current transfer occurs when RL≪RS .

This is a current divider, and the current received by the load is equal to:

which can be approximated by 1 if RL≪RS . (Note: this is the exact opposite of the voltage-as-signal case above!)

There are some active components that can help us minimize loading, such as a BJT emitter follower, or an op-amp voltage buffer, demonstrated here: 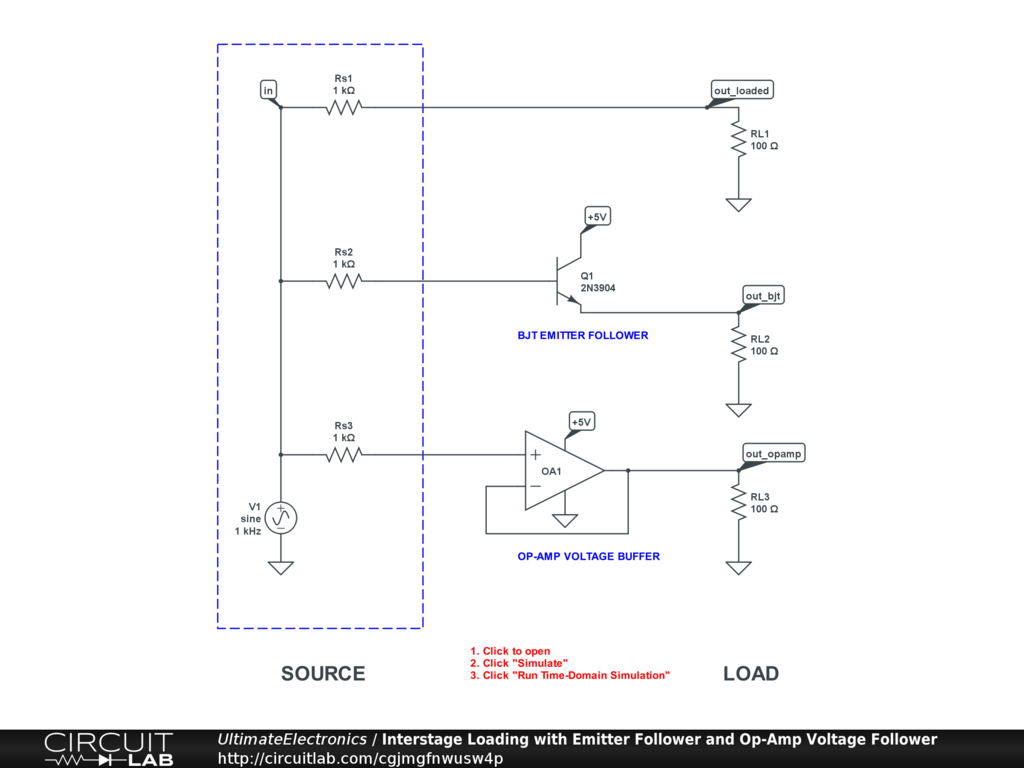 In this example, we’re using a single source V1 to drive three examples at once, so we can compare the loading effects side-by-side. Each one has an independent but equal source resistance RS=1 kΩ , and each has its own load resistance RL=100 Ω .

Per the Voltage as Signal calculations above, we expect to lose about 90% of our signal amplitude because of the incompatible source and load impedances, and that’s what we see in the V(out_loaded) trace. We’ve demonstrated two quick approaches to fixing this, and in both V(out_bjt) and V(out_opamp) you’ll see roughly the full signal amplitude! There is a different DC offset to the BJT emitter follower case, but that can be ignored for now.

There are tradeoffs to adding more parts to your circuit (including more power consumption, more added noise, and higher cost and complexity), but both of these approaches are commonly used ways to minimize interstage loading when needed – and it often is!

If you’ve designed and tested two amplifier stages A and B independently, and then find that they perform worse than expected when connected together A+B, you most likely have an interstage loading problem.

This effect can be even more subtle when connecting filters, which have frequency-dependent behavior. The cutoff frequencies of your filters can change unintentionally due to interstage loading. To fix it, you either need to design with the whole system in mind at once, or you need to make sure that the impedances are far enough away (as described above) that you can approximately ignore one stage when designing the next. The latter approach is easier and more robust, though not always possible.

Deciding What to Maximize

Unsure whether to maximize signal transfer or power transfer? Review our Deciding What to Maximize discussion in the previous section.

In the next section, Dependent (Controlled) Sources, we’ll add several new types of voltage and current sources that are invaluable for modeling more complicated components.